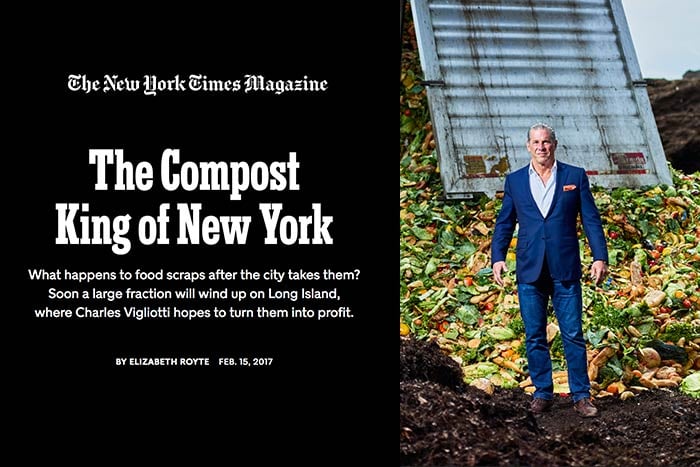 Royte accompanies Vigliotti to the site grounds, taking in the massive structure to be built. She notes the limitations of traditional composting, particularly when food waste includes fish, meat, and greases. An anerobic digester facility will not only be able to handle vastly more material than Long Island Compost, Vigliottii's sister company, and other such organizations, but will process them cleaner, with far less odor, more quickly, and with the ability to make use of all of the end products.

The 50 million dollar digester facility will be the largest such project this side of Mississippi and the most sophisticated. Partnering with GE Water and Process Technologies and Scott’s Miracle-Gro, the Yaphank facility will be able to sort, separate, and process 180,000 tons of food waste material, converting it into renewable energy in the form of biogas and electricity, as well as compost, nutrient-rich plant food, and fertilizer. It will not only be completely sustainable, but extremely lucrative.

This project is but the first in the metropolitan area. If all goes according to plan, several smaller such units will be built in the future to handle the five boroughs’ food waste.