Politico released a comprehensive article on the proposed anaerobic digester to be constructed by American Organic Energy in Yaphank, Long Island. 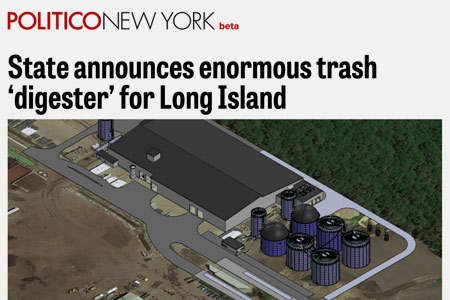 "This is a game-changer," Vigliotti told Giambusso. "We're going for the gold standard in how you process food waste in a civilized world."

Politico reported that the anaerobic digester facility is exceptional not just in its proposed scale and processing capabilities, but in the sophistication of its design, which will allow it to separate the 180,000 tons of organic food waste from contaminants before converting it into natural gas, electricity, purified water, and fertilizer solids.

To be completed by August 2016, American Organic Energy’s anaerobic digester will usher in a new ear of sustainable waste processing in the metropolitan area.