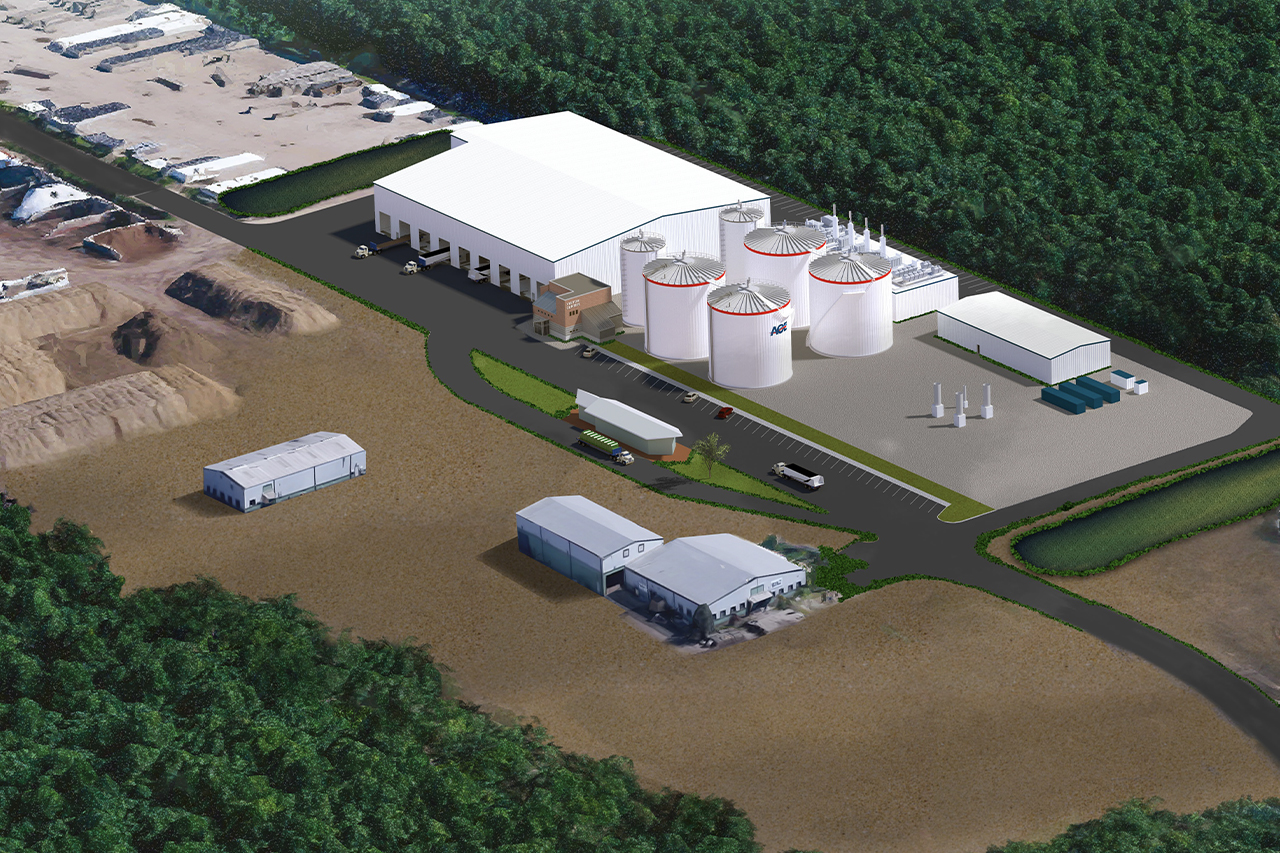 Once constructed at the site of organic compost and mulch manufacturer Long Island Compost in Yaphank, AOE's anaerobic digester will process approximately 180,000 tons of local food waste per year that would otherwise have been transported by gas and diesel-powered trucks to landfills, along with 30,000 tons of fats, oils and greases. The facility will produce four megawatts of clean energy and eliminate 85,000 metric tons of harmful greenhouse gas emissions on Long Island per year—the equivalent of removing 18,000 cars from the road—while also slashing truck traffic on local roads by 1.4 million miles per year. Additionally, Long Island Compost will convert certain stationary equipment from diesel to electricity, a move expected to reduce diesel fuel consumption by an estimated 200,000 gallons per year.

In partnership with Suez Water Technologies & Solutions (formerly GE Water) and Scotts Miracle-Gro, AOE will be equipped to "collect, separate, pre-process, break down, and transform Long Island’s food waste into convertible energy, electricity, fertilizer, and nutrient-rich clean water," states New York Gov. Andrew Cuomo's office, adding that the initiative directly supports the governor's Green New Deal, designed to lead the state down a path to a carbon-free economy, with the ultimate goal of reducing greenhouse gas emissions to 40% below 1990 levels by 2030.

“By implementing this groundbreaking technology on Long Island, we can not only produce clean energy and reduce greenhouse gases, but also spare our landfills and keep our communities cleaner and greener for decades to come.”

The Town of Brookhaven, where the facility will be located, will also have the opportunity to divert up to 15,000 tons per year of food waste from the most costly disposal options currently used.

The board's approval also establishes both annual and hourly limits on the delivery of energy to LIPA. The average residential bill impact is projected to be approximately $0.10 per month.

Gov. Cuomo and LIPA CEO Tom Falcone joined a chorus of environmentalists, energy watchdogs, and elected officials in praising the arrangement, as well as the many benefits of the American Organic Energy plant, via a joint press announcement.

"This project, the largest this side of the Mississippi, has many societal benefits, including creating renewable energy, reducing solid waste and reducing truck traffic," raved Adrienne Esposito, executive director of the nonprofit Citizens Campaign for the Environment. "Today the project is cutting edge, tomorrow it will be standard operating procedure. This transformational project was seven years in the making, the permits are now completed, and we are thrilled the construction can begin."

AOE's anaerobic digester project is supported by the New York State Energy Research and Development Authority’s Cleaner Greener Communities initiative, which provided $1.35 million, and was chosen as a recipient of a $400,000 Empire State Development award by the Long Island Regional Economic Development Council.

Long Island Compost was founded by the Vigliotti brothers more than 30 years ago, and today employs more than 150 men and women, and operates the nation’s largest yard-waste drop-off facility in Westbury, as well as a 62-acre facility in Yaphank. Hundreds of thousands of tons of leaves, grass clippings, and other landscape-related materials from more than 2,000 landscaping companies are harvested and recycled into organic compost at these sites annually.


To learn more about American Organic Energy and its anaerobic digester project, contact us today.