As a pioneer in converting organic waste to renewable natural gas, the metro area is primed to continue its leadership the development of biogas. 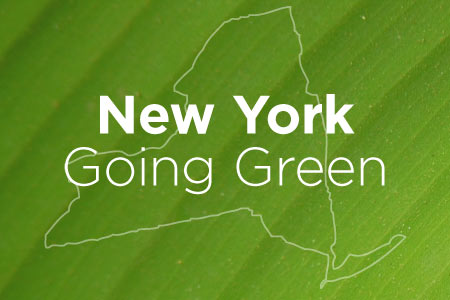 As an early pioneer in converting organic waste to renewable natural gas, the New York metro area is primed to continue its extraordinary leadership the development of biogas.

In 1980, the Fresh Kills landfill in New York was the first facility of its kind to capture and put biogas to use. As a region whose waste stream is comprised of 31 percent organic waste, the metro New York area sits at the precipice of revolutionary possibilities in waste conversion.

The realms of possibility and the obligation of industry to conserve and convert waste into energy was the topic of discussion with industry leaders on an Energy Vision and Urban Future Lab reception entitled The Power of Waste: Extracting the Greatest Value from NYC’s Organics held in Brooklyn on May 20.

Bob Catell, chairman of the Advanced Energy Research and Technology Center at Stony Brook University and former head of National Grid U.S., played a key role in the building of the facility in Fresh Kills. He supports the expansion of this process as a means to revamp the organic waste processing system and in the conversion to renewable natural gas (RNG).

“Renewable natural gas has all the benefits of other natural gas and it’s cleaner,” Catell said at the conference, according to waste360. “But you don’t have to drill to find it, it comes from renewable resources. It can be used for fuel, co-generation, whatever you use natural gas for.”

The proposed anaerobic digester in Yaphank, Long Island by Charles Vigliotti, President and CEO of American Organic Energy would support this technological vision on Long Island. The first of its kind in the metro area, the digester will l accept 160,000 tons per year of food waste - which would have otherwise been transported and dumped into distant landfills - along with 30,000 tons of fats, oils and greases (“FOG”) and 10,000 tons of grass clippings. These waste streams will be converted to clean energy, clean water and compost.

By partnering with GE Water, Quasar Energy, and Scott’s Miracle-Gro, AOE will be able to collect, separate, pre-process, break down, and transform Long Island’s food waste into convertible energy, vehicle fuel, electricity, fertilizer, and nutrient-rich water. This almost completely sustainable model will be instrumental in revolutionizing the way organic waste in processed in the New York, carrying on its storied tradition as a trailblazer in the nation’s environmental strategy.