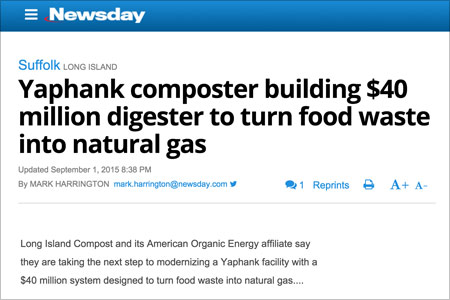 On Wednesday, September 2, Newsday’s Mark Harington reported that Long island Compost and American Organic Energy are “taking the next step” toward modernizing LI Compost’s facility into a $40 million anaerobic digester.

The digester will convert 180,000 tons of food waste into sustainable energy, vastly reducing the carbon footprint on Long Island by reducing 40,000 tons of greenhouse gases.

According to Newsday, a $1.35 grant from the New York State Energy Research and Development Authority helped facilitate this project. NYSERDA president and chief executive John. B. Rhodes told Newsday, “This anaerobic digester is a significant step forward for the Long Island region in minimizing greenhouse gas emissions and reducing material going into landfills, providing economic and environmental benefits to its residents.”

The facility is due to be completed by August 2016.

For the full story, read here